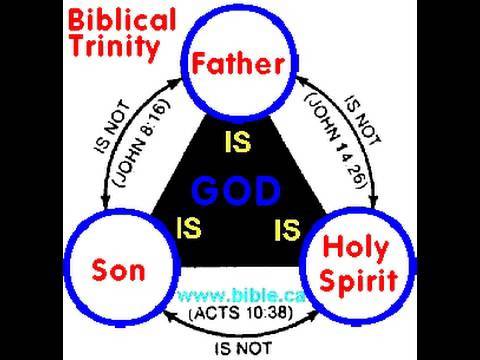 We believe in One God1., the trinity of God the Father, God the Son, and God the Holy Spirit, equal in power and majesty.
God the Father who in His glory is so awesome and glorious, that no man cannot look at His face and live2., He that loves man so much, that He gave his only begotten Son to die on the cross for our sins, through which we are redeemed and reconciled with God the Father3..
God the Son, Co-existent and eternal with God the Father4., who was conceived of the Holy Spirit and born of the Virgin Mary5. took it upon Himself the form of man, carried our sins and sorrows. By the shedding of His blood upon the cross of Calvary, purchased redemption for all who believe in Him. Then broke the hold of death and hell and arose from the grave to ascend on high leading captivity captive, that's the great mediator between God and man6., He will stand at the right hand of the Father, speaking on behalf of those for whom He has given His life.
The Holy Spirit, third person of the Godhead7., the Spirit of the Father, omnipotent, omnipresent, performing an inexpressible important mission upon the earth, convicting mankind of sin, righteousness, and judgment, bringing sinners to the Savior Jesus Christ8., rebuking, pleading, searching, comforting, bringing alive, teaching, glorifying, baptizing and imparting with gifts and power to those who will submit to His leadership and guidance. Preparing them for the second coming of Jesus the Christ.