As a theology, dispensationalism is expounded in the writings of John Nelson Darby (1800–82) and the Plymouth Brethren movement, and propagated through works such as Cyrus Scofield's Scofield Reference Bible.

The theology of dispensationalism consists of a distinctive eschatological end-times perspective, as all dispensationalists hold to premillennialism and most hold to a pretribulation rapture.
In dispensationalism we believe that the nation of Israel is distinct from the Christian Church, and that God has yet to fulfill his promises to national Israel. These promises include the land promises, which in the future world to come result in a millennial kingdom and Third Temple where Christ, upon his return, will rule the world from Jerusalem for a thousand years.
In other areas of theology, dispensationalists hold to a wide range of beliefs within the evangelical and fundamentalist spectrum.
We believe in dispensationalism, that the Book of Revelation is not an account of past events (with specific reference to the destruction of Jerusalem in AD 70, a position known as Preterism) but as predictions of the time to come.
Estimates of the number of followers of Dispensationalist beliefs vary between 5 and 40 million in the United States alone.
Biblical covenants are intricately tied to the dispensations.
When these Biblical covenants are compared and contrasted, the result is a historical ordering of different dispensations.
Also with regard to the different Biblical covenant promises, dispensationalism emphasises to whom these promises were written, the original recipients.
This has led to certain fundamental dispensational beliefs, such as a distinction between Israel and the Church.
Another important theological concept is the emphasis on what is referred to as the historical-grammatical method of interpretation.
This is the "literal" interpretation of Scripture.
Just as Israel was said to have literally experienced the curses spoken of in the Old Testament, within dispensationalism we believe that they will one day, literally, receive the blessings spoken of in the Old Testament.
In dispensationalism we hold to a clear distinction between Israel and the Church.
Israel is an ethnic nation consisting of Hebrews (Israelites), beginning with Abraham and continuing in existence to the present.
The church consists of all saved individuals in this present dispensation—i.e., from the "birth of the Church" in Acts until the time of the Rapture.
The distinction between Israel and the Church is not mutually exclusive, as there is a recognized overlap between the two.
The overlap consists of Jewish Christians (such as Peter and Paul – although the Apostle Paul was also a Roman citizen, by birth, he was of the tribe of Benjamin and a strong Jewish nationalist in heart (Rom 9:1-3)) who are ethnically Jewish and also have faith in Jesus Christ.
Paul: “I’m speaking the truth in Christ—I’m not lying, as my conscience assures me with the Holy Spirit: 2 I have great sadness and constant pain in my heart. 3 I wish I could be cursed, cut off from Christ if it helped my brothers and sisters, who are my flesh-and-blood relatives.” Romans 9:1-3 (CEB)

The label "dispensationalism" is derived from the idea that Biblical history is best understood through division into a series of chronologically successive dispensations.
There are several different interpretations of the dispensations, they are typically held as the three, four, seven, or eight dispensations.
Personally I adhere to the 7 – 8 dispensations.


I believe with the mainstream dispensationalists such as Scofield and Ironside identify Pentecost, in the second chapter of Acts, with the start of the Church as distinct from Israel; this we will refer to as the "Acts 2" position. 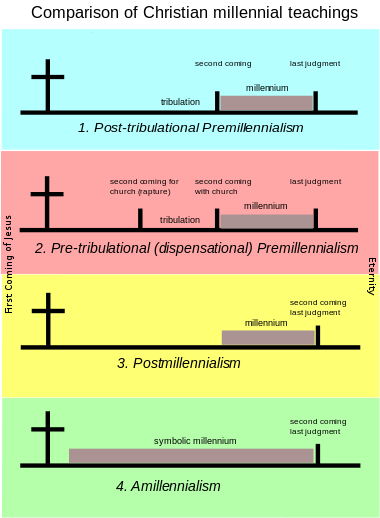 Dispensationalist believe that the church started after Acts 2, focusing primarily on the ministry of Paul.
This we are call the Pauline doctrine or the modern day Hyper Grace movement.
This is not something I will or can believe in, however theological discussion of these differences falls outside of the scope of this paper.

As a dispensationalists I adhere to the thought of the pre-tribulational premillenialists and affirm a future, literal 1,000-year reign of Jesus Christ which merges with and continues on to the eternal state in the "new heavens and the new earth", and hold that the millennial kingdom will be theocratic in nature.
Dispensationalism is known for its views respecting the nation of Israel during this millennial kingdom reign, in which Israel as a nation plays a major role and regains a king, a land, and an everlasting kingdom.
The vast majority of dispensationalists hold to the pretribulation rapture, with small minorities holding to either a mid-tribulation or post-tribulation rapture.

Dispensationalism rejects the notion of supersessionism, sees the Jewish people as the true people of God, and sees the modern State of Israel as leading to the Israel of biblical promises, a national Israel who will receive the fulfillment of all God's Old Testament promises, as the restoration prophesy as in the book of Ezekiel is being fulfilled at this moment.
John Nelson Darby taught, and most subsequent dispensationalists myself included have consistently maintained, that God looks upon the Jews as his chosen people even as they remain in rejection of Jesus Christ, and God continues to have a place for them in the dispensational, prophetic scheme of things.
Dispensationalists teach that a remnant within the nation of Israel will be born again, called of God, and by grace brought to realize they crucified their Messiah.
Dispensationalism is unique in teaching that the Church is a provisional parenthesis, a "mystery" period, meaning that it was not revealed in the Old Testament, directly, which period will end with the rapture of the church and the Jewish remnant entering the Great Tribulation.
Israel will finally recognize Jesus(Yeshuah) as their promised Messiah (Yeshua Ha'Mashiach) during the trials that come upon them in this Tribulation.
Darby's teachings envision Judaism as continuing to enjoy God's protection literally to the End of Time, and teach that God has a separate 'program', to use J.Dwight Pentecost's term, for each Israel and the Church.
Dispensationalists teach that God has eternal covenants with Israel, which cannot be broken.
While stressing that God has not forsaken those physically descended from Abraham through Isaac, dispensationalists do affirm the necessity for Jews to receive Jesus as Messiah.
They hold that God made unconditional covenants with Israel as a people and nation in the Abrahamic, Palestinian, Davidic and the New Covenant.
Within the dispensationalism I do with many other Christians and Messianic Christian churches and believers what some critics have pejoratively called Judeophilia—which holds on to the support of the state of Israel, and may include the observing traditional Jewish holidays and the practicing of some or all of the traditionally Jewish religious rituals. Within Dispensationalism I do support the modern state of Israel, recognize its existence as God revealing His will for the Last Days, and reject anti-Semitism.


Wikipedia on dispensationalism and the tribulation
with personal additions and substractions.